skip to main | skip to sidebar

This blog is clearly taking a nap.

Mosey on over to our website to get current content and up-to-date listings at smallpresstraffic.org
Posted by Small Press Traffic at 11:10 AM 0 comments

While Etel Adnan still holds this year's place of honor as SPT's lifetime achievement award winner, she will unfortunately not be in town to attend this event. Therefore, the event on December 10th is cancelled.

In recognition of our respect and admiration of Etel, we will be collecting materials to post on our website in honor of her. If you would like to contribute to this, please email smallpresstraffic@gmail.com.

Thanks much,
Samantha
Posted by Small Press Traffic at 7:29 AM 0 comments

It would mean ever so much to us over at Small Press Traffic if you would take a few moments to fill out our anonymous online survey here.
Your responses will help us to continue providing the kinds of programs and events that you find most fun, inspiring and relevant.
Thanks ever so,
Samantha.

Please join us for a Tribute to Leslie Scalapino 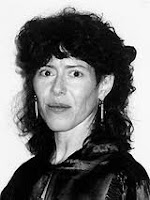 You're invited to the premiere production of Leslie Scalapino and Kevin Killian's STONE MARMALADE!


Stone Marmalade retells the legend of Orpheus and Eurydice, as seen through the theoretical writings of Giorgio Agamben. Scalapino and Killian attended Agamben's lectures at UC Berkeley 15 years ago, and misusnderstood the philosopher's thick Italian accent so thoroughly that they got quite a lot wrong in their script.

When the Nazis inducted prisoners into the death camps, they first took away their passports and stripped them of their former nationality. Agamben said that doing so reduced the prisoners to "mere birth-life," but we thought he was saying "bird-life," and so a lot of our play is bird oriented. It takes place in Hell, where Eurydice, the Queen of Hell, operates a duty-free shop (another Agamben notion about the extra-juridical status shared by duty-fgree shops and by the death camps) assisted by an easy-going PA, Kathy.

The women find themselves in a double triangle, both of them variously attracted ti Orpheus and to the visiting Giorgio Agamben. But the play doesn't really begin until Kathy gets pregnant and will give birth to a bird unless Eurydice allows her to have a human baby, and also, the gates of hell part and Julia Roberts has come to make a film there, or to die there, no one is sure which. Over the past 15 years we have put on various scenes, but this will be the first time the play has ever been seen in its entirety.

_________
Leslie Scalapino passed away on May 28, 2010 in Berkeley, California. She was born in Santa Barbara in 1944 and raised in Berkeley, California. After Berkeley High School, she attended Reed College in Portland, Oregon and received her B.A. in Literature in 1966. She received her M.A. in English from the University of California at Berkeley in 1969, after which she began to focus on writing poetry. Leslie Scalapino lived with Tom White, her husband and friend of 35 years, in Oakland, California.

In childhood, she traveled with her father Robert Scalapino, founder of UC Berkeley’s Institute for Asian Studies, her mother Dee Scalapino, known for her love of music, and her two sisters, Diane and Lynne, throughout Asia, Africa and Europe. She and Tom continued these travels including trips to Tibet, Bhutan, Japan, India, Yemen, Mongolia, Libya and elsewhere. Her writing was intensely influenced by these travels. She published her first book O and Other Poems in 1976, and since then has published thirty books of poetry, prose, inter-genre fiction, plays, essays, and collaborations. Scalapino’s most recent publications include a collaboration with artist Kiki Smith, The Animal is in the World like Water in Water (Granary Books), and Floats Horse-Floats or Horse-Flows (Starcherone Books), and her selected poems It’s go in horizontal / Selected Poems 1974-2006 (UC Press) was published in 2008. In 1988, her long poem way received the Poetry Center Award, the Lawrence Lipton Prize, and the American Book Award from the Before Columbus Foundation. Her plays have been performed in San Francisco at New Langton Arts, The Lab, Venue 9, and Forum; in New York by The Eye and Ear Theater and at Barnard College; and in Los Angeles at Beyond Baroque.

In 1986, Scalapino founded O Books as a publishing outlet for young and emerging poets, as well as prominent, innovative writers, and the list of nearly 100 titles includes authors such as Ted Berrigan, Robert Grenier, Fanny Howe, Tom Raworth, Norma Cole, Will Alexander, Alice Notley, Norman Fischer, Laura Moriarty, Michael McClure, Judith Goldman and many others. Scalapino is also the editor of four editions of O anthologies, as well as the periodicals Enough (with Rick London) and War and Peace (with Judith Goldman).

Of her own writing, Scalapino says “my sense of a practice of writing and of action, the apprehension itself that ‘one is not oneself for even an instant’ – should not be,’ is to be participation in/is a social act. That is, the nature of this practice that’s to be ‘social act’ is it is without formation or custom.” Her writing, unbound by a single format, her collaborations with artists and other writers, her teaching, and publishing are evidence of this sense of her own practice, social acts that were her practice. Her generosity and fiercely engaged intelligence were everywhere evident to those who had the fortune to know her.

Scalapino has three books forthcoming in 2010. A book of two plays published in one volume, Flow-Winged Crocodile and A Pair / Actions Are Erased / Appear will come out in June 2010 from Chax Press; a new prose work, The Dihedrons Gazelle-Dihredals Zoom was released this summer by Post-Apollo Press; and a revised and expanded collection of her essays and plays, How Phenomena Appear to Unfold (originally published by Potes & Poets) will be published in the fall by Litmus Press.
Posted by Small Press Traffic at 2:17 PM 0 comments

YOU ARE INVITED TO AWESOMENESS

Music from the Alameda Ensemble!

SPT Presents: the Shakers! a play by Kevin Killian and Wayne Smith

SPT PRESENTS: The Shakers! a play by Wayne Smith and Kevin Killian

More Info Shortly after the US Civil War, a band of spiritual pioneers live simply on a rural commune, rejecting the temptations of the outside world. United in their devotion to Mother Ann Lee (but separated by gender), they invent ingenious chairs still used today: rocking, high, electric and wheel, among others. In ecstasy, they whirl, tremble and shake on the floor, hence the name "Shakers." But wrinkles are beginning to appear in their 19th century utopia of clean lines. A rebellious Shaker girl with amnesia begins naming the stars in the sky, daring to dream of a life outside her village; an aged patriarch hides a shameful secret; an old woman tells fortunes by listening to apples ripen; a wounded and bitter Civil War veteran watches as his world divides in two. Near the end, a new broom is invented.
Posted by Small Press Traffic at 9:03 AM 0 comments

Born in Tokyo, Hiromi Itō is regarded as one of the most prominent poets of contemporary Japan. Since her debut in the late 1970s, she consistently has expanded her creative spheres: from issues of sexuality to the oral traditions of Native Americans, the lifecycles of plants, and migrant and transnational experiences.

About Itō’s first U.S. edition of work, Killing Kanoko: Selected Poems of Hiromi Itō, renowned poet Anne Waldman writes, “Her poems reverberate with sexual candor, the exigencies and delights of the paradoxically restless/rooted female body, and the visceral imagery of childbirth. . . . Hiromi is a true sister of the Beats.”

Itō has published more than 10 critically acclaimed collections of poetry; several novels; and a dozen books of essays, including Oume (Green plums, 1982), Watashi wa Anjuhimeko de aru (I am Anjuhimeko, 1993), and Kawara Arekusa (Wild grass upon a riverbank, 2005), which won the prestigious Takami Jun Prize.
Posted by Small Press Traffic at 7:46 AM 0 comments